Searching for Syd Pullen / The Power of the Internet

It probably goes without saying that there is a lot of useful information on the internet, if you just know where to look for it.

Fortunately, there are also a lot of helpful people out there.

I'd been puzzled by a couple of letters my dad had kept since his days in WW2. He didn't save very many, but two of them were written by dad and returned to him with "missing" written on the envelopes. Clearly these letters were important to dad, so I feared the worse.

Having joined the internet forum "ww2talk" a few months ago, I decided to try my luck with the question: Whatever Happened to Syd Pullen, 9th Battalion Royal Fusiliers?

The response was amazing, and very quickly I found some key information.

Since Syd grew up only a mile or so from dad in Sherbourne (Dorset) and was the same age, they were probably school friends. They both served in Heavy Anti Aircraft Royal Artillery regiments.

As the demand for foot soldiers increased sharply in the summer of 1944, many soldiers were transferred from the role they had been trained for. Syd was one of those, and died a few weeks later.

He is commemorated on a Cassino war memorial, and recorded on the Commonwealth War Graves Commission web site: https://www.cwgc.org/find-war-dead/casualty/2072002/pullen,-sydney/ 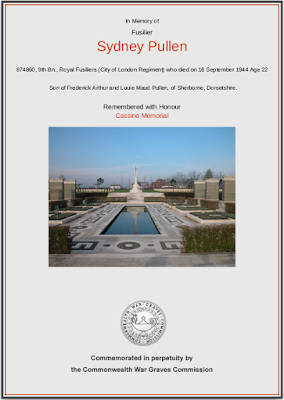 As for ww2talk, all I can say is that there are some nice, talented and helpful guys & gals there. So if you need help, don't be afraid to ask.


See also: You've got post to view the full letter.