Regimental War Diaries can provide more detail on the regiments strength, movements and activities during WW2.


They were written at the time, so provide a first hand account, and make fascinating reading.


I recently obtained a copy of the 59th HAA Regiment's War Diaries for the period December 1942 to June 1943. This covers the regiments move from Britain to North Africa following the Operation Torch landings in November 1942.

These diaries provided me with fresh information and clarified a few points. I had thought that my dad sailed with convoy KMF-05, but for some reason, Battery 164 traveled separately from the rest of the 59th regiment in the later convoy KMF-06.


War Diaries are stored in the National Archive. They can provide photo copies for you, but will naturally charge you for this service. You can also visit in person, request documents, and make photo copies. However, I used the services of a guy on the WW2Talk forums.

what do the diaries contain? 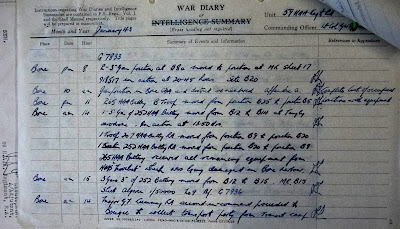 ...and many of these entries relate to the movement of batteries to new positions. Each position is generally a simple reference like "B12" which means nothing without a map or description of where this is located.

However, the documentation also includes intelligence summaries which often detail enemy attacks, allied responses, and an indication of the number of shells used, the positions/guns/sections who engaged the enemy and number of enemy aircraft shot down. This reports may also include the type of aircraft, estimated speeds and enemy tactics, e.g. flying low, flying out of the sun, & so on.

For each month there is also an indication of regimental strength (numbers), the names of all officers, and sometimes a list of names for those that the regiment would really like to be discharged from hospital!

is it worth the effort/cost of obtaining these diaries?


If you are interested in a particular Royal Artillery regiment or someone that was in that regiment, I would strongly suggest you start by talking to the archivists at the Royal Artillery Museum first. They will tell you if the DRAMA report is worth having for the regiment in question.

If it is, start with this. The DRAMA Report will give you a good over-view of what the regiment did between 1939-1946. From there you may decide (as I did) just to get extracts from the full War Diaries.

This approach may save you time and money. However, it you want 'to leave no stone un-turned' in your research, you may want to get the full diaries anyway.