Getting a copy of Military Service records

A few weeks ago I decided to apply for my dad's military records.


I thought his records may help to "flesh out" his World War 2 history, while at the same time
confirming a few dates concerning postings, training and promotion.

The process is quite straightforward, and starts by visiting the website: https://www.gov.uk/get-copy-military-service-records

You need at least the following minimum info: a copy of the persons Death Certificate, their full name & date of birth (although this would not have been enough for my dad, as his year of birth was wrong on his military records! Fortunately I had my dad's Service Number).

Any additional info will help narrow down the search (e.g. "He was a rear gunner on Lancaster bombers during WW2").

It will cost you £30, even if the search is not successful, unless you are the spouse of the person in question.


Since requests for information from the 3 services (British Army, Royal Navy, & Royal Air Force) are handled by different organisations, I guess what you get back within your package of information will vary.

In my case I had the following:- 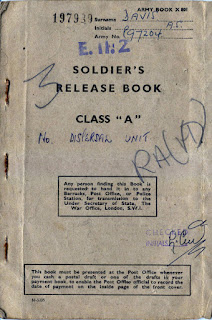 I now need to find some time to study this stuff in detail, and then make any appropriate changes to my dad's history. A remaining problem is that many of the abbreviations in his records are not covered in the "Useful Abbreviation" document.

For example; I know L/Bdr means Lance Bombardier, but what does: U/A/L/Bdr mean?