From North Africa, the Allies first took Sicily before invading Italy at the beginning of September 1943.

Dad’s regiment had moved from Bone in Algeria to Bizerta in Tunisia during the 12th - 14th September 1943. They now came under the command of the 52nd AA Brigade.


With the ending of hostilities in North Africa, the 59th Regiment made the long haul to Tunisia, seeing for the first time the terrible territory over which the Allied Armies had fought.

Coming down one particularly steep mountain road with a sheer drop on one side, we were suddenly overtaken by the guns towed by (I believe) 167 Battery. They passed us at speed, and we thought “That’s the way to go”.

Later, when we came across the crashed vehicles and injured men, we heard how the air brakes had failed, and it was only the nerve and skill of the drivers which had prevented an even greater tragedy occurring.

On the 21st October, the 59th sent a reconnaissance party to Naples, arriving of the 23rd October.

The regiment boarded a ship to Bagnoli (near Naples) on the 14th November arriving 2 days later.


164 (dad’s Battery) took A.A. defence of the boat. This gave us certain facilities on board and kept us active. {i.e. they didn’t have to queue like the others for food, toilets & so on}


We eventually arrived at Ferryville near the port of Bizerta a week or so later, embarking on LCTs {tank landing craft} for Naples where we arrived two days later in fading light, to spend a freezing cold night in our lorries on the dockside. Quite a shock after the heat of Africa.

Battery 265 “E” & “F” troops spent the next night in our two man “Bivis”, and in the morning were delighted to be handed little cups of hot, sweet coffee by the women in the nearby farm. It was nice to know that the natives were friendly.

We soon established our gun site on a flat open area not far from Capadichino Airfield. “E” & “F” troops together on one site for the first time.

We sent out “scrounge” parties every day to collect or filch whatever materials we could to improve our living conditions. Also, a good bartering system was established with some nearby American troops, who are “dry” in the line, swapping our Sergeant’s ration of spirits for all kinds of goods, including tins of jam, egg and ham, and canned fruit juice.

Soon we were one of the best equipped sites; every shack or tent had electric lights, the sergeants all had water-proof torches, and the cooks were able to produce meals which were far and above the normal issue. The “Q” bloke {Quartermaster Sergeant} tried his best to catch the suppliers, but never did.

By Christmas we even had our own small farm, with geese and turkeys on the establishment being fattened up for the Xmas celebrations.

In contrast to our well fed troops, the local population were near starvation. The retreating Germans had taken or destroyed everything, so for some weeks after we arrived, large numbers of men, women and children would gather round the perimeter wire at meal times, waiting in the bitter cold for any left-overs, and even fighting among themselves over scraps. It was a pitiful sight.

Very little action was seen at first, but the weather was terrible; cold wind and rain most of the time, and mud.

For troops facing the Germans on opposite banks of the Volturno river, life must have been sheer hell. At night, safe undercover in our tents, under dripping trees, we could see the distant gun flashes and realised how lucky we were.

With the coming of spring, and the better weather, the Allies were able to advance towards Rome, unknown to them at the time that a certain Monastery {???} would hold up their advance for months.

The "monastery" mentioned by H.R.Glover was the hilltop sanctuary of Monte Cassino. The German troops were holding their positions along the Gustav Line, but by May they were overwhelmed by Allied Troops and forced to retreat.


26th November 1943 Naples raided, all troops into action, no casualties.


You will remember that the 164 Battery had to quit its 8-gun site because of the lava flow from the eruption of Vesuvius in March 1944. The Battery was moved to an idyllic spot on the outer reaches of the Bay of Naples, to a village named Bacoli, and Battery HQ was in a requisitioned villa in that village; the guns of one troop being nearly on the shore and the other troop in the hills behind the village. I think that the authorities must have forgotten about us. There was no enemy action and so little to do. I seem to remember that our time was taken up by a diversion called “Running Rabbit” and an exercise whereby we fired at targets 180 degrees off course, or some nonsense like that.

The Battery HQ villa was a luxurious place which belonged to an Italian film producer, and we spent a wonderful summer there, swimming, sun bathing, sailing (we found a yacht in a cellar under the villa) and generally lounging about. Other members of the Regiment were only too keen to visit us and some spent their leave with us in preference to spending it at the Regimental rest centre at Vico Equesne. In retrospect, it does not seem right that we should have had it so easy when our lads were slogging their way up Italy, landing on the beaches on D-Day, and the buzz-bombs {V-1} were devastating London.

Two incidents at Bacoli stay in my mind. One was the visit by a US Navy Coronda flying boat which “landed” in the bay opposite the villa. We all inspected it and we entertained the Officers and crew in our time-honoured manner; we got them so “tight” that they had to delay their departure.

The other was a visit from the Special Investigation branch of the Military Police. We were informed that they had been tipped off that a boat from Sicily was going to run contraband goods and girls into Bocoli, and could they keep watch from our villa which had a good view of the harbour? This they did and some time later the boat arrived; the MPs went on board the boat, which anchored out in the channel. They arrested the crew, took the girls off the boat, and told us that the boat was crammed with black-market food, cigarettes and booze. They asked if we would put an armed guard on board for the night until they could provide their own. Sergeant Major Reg Woods was delighted to do so, especially when we found out what was on board.

Suffice to say that the guards we put on board did their duty by their pals and turned a blind eye to the enthusiastic working party which went aboard and “lifted” sufficient wine (Marsala) to give almost everyone in the Battery a bottle of it, and other delicacies which were welcome additions to the normal rations.

The comment about 164 Battery moving because of the eruption of Vesuvius turns out to be incorrect. According to the regiments Drama Report:-

On 18 Mar Vesuvius erupted and by 21 Mar the lava flow was moving in the direction of N14 which was ordered to be ready to move. In the event this was not necessary as the lava flow stopped on 23 Mar.

On 31 Mar 164 Bty moved to the Pozzuoli area to relieve 305 HAA Bty of 100 HAA Regt which was leaving the area. A Troop occupied B9 and B Troop occupied B2. BHQ was established in a nearby house.


In June 1944 the Regiment was assisted by the arrival of 238 African soldiers.


The Regiments numbers were boosted by southern African soldiers posted to the 59th Regiment during June 1944. Around 20,000 men left Basutoland (now known as Lesotho) to fight in World War 2. These troops were known as the Basutos, people from the Bantu ethnic group.

From the Regiments Drama Report;


On 2 Jun 238 African ORs were posted to the regt to replace British gun numbers. All were trained in AA gunnery duties with 120 HAA Regt in Cyprus. On average, each Battery now had 215 British ORs (BORs) and 75 African ORs (AORs).

I must pay tribute to the Basuto, it must have been most difficult for them to fit in. It was not long before they wanted to wear the Essex Cap Badge, thus showing they felt part of the Regiment, and their loyalty to the Crown was outstanding, they were fighting for their King.


The way the Basuto fitted in to the Regiment pays a tribute to the British members who made them so welcome.

The Basuto stayed with the regiment until 18th May 1945 when they were transferred to the Middle East.

Enemy activity was now at a low level. During April 1944 Troops A & E fired upon sea targets, and 2 enemy ships were sunk.

The 59th stayed in Naples until October 1944, moving to Brindisi to relieve 87 HAA Regt, with all batteries coming into action by 17th October.

There was virtually no enemy action around Brindisi, so by the 28 November they were "stood down" and moved to Leghorn (now known as Livorno) by the end of December.

In April 1945 this Special Order Of The Day was issued; 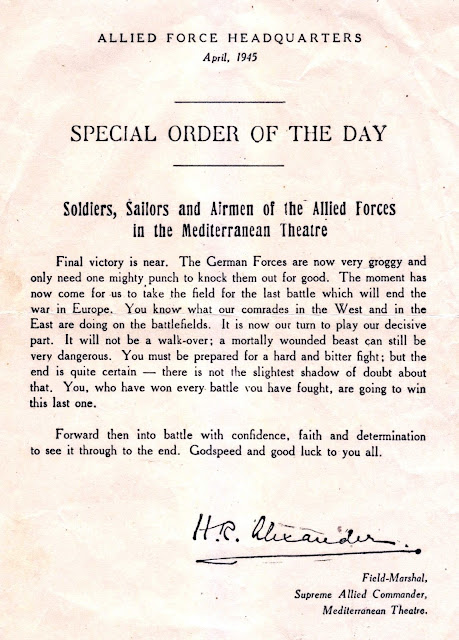 On 4th May 1945 the 59th Regiment's operational commitments came to an end, and the African soldiers left the regiment. 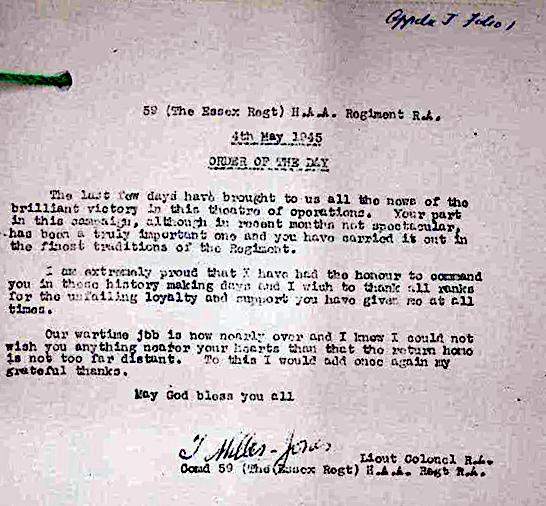 In the first paragraph Miller-Jones says "Your part in this campaign, although in recent months not spectacular..." is a reflection of the defensive role of the 59th, and a recognition that enemy action had obviously dropped to a very low level, as Hitler's war machine gradually ground to a halt.

It appears that a number of men were transferred out of the 59th Regiment during the previous year and sent to where there was a greater need for soldiers. This was the fate of my dad's childhood friend Syd Pullen (see 'You've Got Post').

Syd was transferred out of an HAA role to become a foot soldier. Within 10 weeks he was dead. I wonder if the training he received in that short time was enough to change him from Gunner to Fusilier.

There were a couple of things I remember dad saying about Italy. He said they often came across bodies hung up on trees or tied to fences alongside the road. They were unable to cut these down for burial, or even approach them, as they were sometimes booby-trapped.

He also hated the way some soldiers encouraged children to follow them around by offering chocolate. Many followed the troops north and were eventually abandoned, many miles from home. However, I suspect there was more to it than just chocolate and a free ride, that upset dad about this.


Dad was 23 by this time, and had matured into a man with a disgust for the horrors of war. Quite a change from the 17 year old boy who was only too keen to serve his country.

But dad was more fortunate than many others who returned from the war as 'damaged goods'. Some of course had physical injuries such as missing limbs, while others were mentally scarred, from which they never recovered.