The defense of Bone

During 1943 Bone frequently came under attack, as it was an important supply port for the 1st Army.  The 59th HAA became a major component of the 66th AA Brigade, and once established, their job was to stop German and Italian planes from destroying the city of Bone, the airfields, the harbour and the ships moored there.

The 59th HAA (along with the RAF) provided protection from air attack for much of the surrounding area, but particularly the "Vital Area" (referred to as the VA in the regiments War Diaries).

Here is an extract from the War Diaries for February 1943:-

1. The Vital Area of BONE is the dock and harbour area. All AA defences of BONE are deployed for the defence of this area.

2. The minimum number of AA guns allotted to the defence of BONE AA is 6 Troops {that's 3 Batteries with a total of 24 guns}. In addition, there are 2 Troops allotted each to BONE and TINGLEY airfields. When these guns are not involved in the immediate defence of the airfields they will take part in the BONE AA defence to the extent that their positions allow.


An often quoted post-war 'statistic' is that the anti-aircraft hit rate was only 1 in 6000 shells fired, and some have suggested that this was just an unnecessary waste of resources. It is true that a lot of ammunition was wasted. In the early days of the London Blitz I understand that Churchill ordered the AA guns (light & heavy) to fire randomly into the night sky, just as a public relations exercise (a kind of morale booster).

But the anti aircraft teams were doing a real and valuable job, especially as the war progressed, the equipment improved, and the gunners had access to radar.

According to Routledge ("Anti Aircraft Artillery 1915-1955"), on the night of 1st/2nd January 1943 at Bone, enemy bombers, escorted by fighter aircraft, attacked in several 'waves'. The score of 6 'kills' was broken down as follows:-

This gives an average kill rate of 1 in 235, but I would caution that this is just as meaningless as the 1 in 6000 figure.

In addition to 'Category 1 kills', many pilots would have broken off the attack, either due to incurring damage, or because the risks were too high. Having dropped a few bombs, some crews may have decided that they had "done enough" and headed for home.


"Behind the front, 66th Brigade was still being hammered at Bone....Enemy aircraft made full use of seaward and 'sneak' approaches along the coastal cliffs, where radar cover was limited in its application; Bone had little early-warning of raids approaching the town. Nevertheless, 66th AA Brigade had achieved a score of 40 aircraft destroyed; 28 by HAA, 9 by LAA, and 3 by light machine-gun fire from searchlight positions."

According to Henry Moore, they were subjected to over 350 air-raids, during which they managed to bring down 32 aircraft.

From some notes written in the Eagle & Gun annual newsletter 1992;


You may also be interested in being reminded that your efforts at Bone did not pass un-noticed. An intelligence report by the A/Adjutant of the 59th (a Lieut Mitchel?) says you all put up a jolly good performance, in fact, you and the RAF between you saw off about 20% of the aircraft used on the raids during the first half of January 1943 in the Bone sector.

He also points out, in a not too serious vein, that you are still being very naughty in sending postcards home showing views of Bone, he reminds you that only pictures of Algiers may be sent (some wrist slapping by BCs will follow in due time). I wonder what Battery could have caused that outburst?


In additions to the successes of the guns and the RAF mentioned above, the 59th RAA War Diary for March 1943 notes:-


It should be noted that the French AA Batteries were also playing their part at sites around Bone. I believe one of these was on a hillside above my dad's battery for a while


The Americans had an unrealistic view of their own capabilities, and hadn’t experienced the might of the Germany army until the battles of Kasserine Pass during February 1943, where thousands of Allied troops were either killed or taken prisoner. Allied ordinance such as tanks and field guns were also abandoned, and captured intact by the Germans.

A London newspaper reported that the Americans had been unprepared for battle, “...misled by the stupidity of Hollywood’s war films...”.

This incident also proved that the German 88mm guns were superior to anything used by the Allies and could destroy any Allied tank at a range of up to half a mile.

Eisenhower put together a team of experienced British officers to assist in training programs for American troops. It was a delicate issue to address at a time when there was some bad feeling between British and American troops.

As a child I can remember Ted Sears (another Benfleet neighbour) saying;

Discipline within the American military was also seen as inferior to other Allied troops. Most troops would “jump to it” when ordered to do something. With the Americans, there was a tendency to ask “why?”

It wasn’t only the ordinary British solders that criticised the abilities of the American troops. A message sent by Montgomery (who had driven back Rommel in the north east) to Alexander;


“If my operations to break through the Mareth line are successful, I shall go pretty fast once I’m through the gap...I do not want the Americans getting in the way.”

However, in the final push to defeat the German army in Tunisia, the much-maligned American 34th Division won respect by storming a hill where German artillery had blocked II Corps progress.

The strange case of the Major & the Private


Every serviceman (and woman) had an AB64 which was a kind of personal identity document. This needed to be presented when requested, including when collecting your pay. 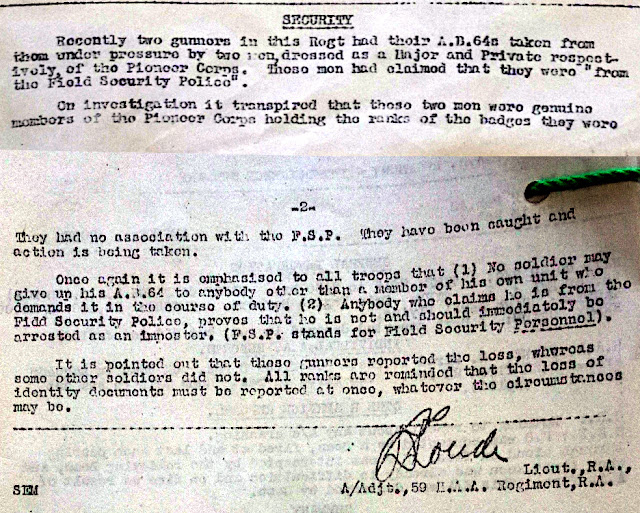 I'd love to know the full story. What were these guys doing with these AB64s? Maybe they had a value on the black market, but I guess I will never know.


Sex is not a new phenomenon, but the sexual landscape was different back in the 1940s. They had never heard of HIV, but VD (venereal disease) was a big worry, as was unwanted pregnancy in that pre-pill era.

A cocktail of young men abroad, mixed with local poverty and hunger, resulted in both supply and demand for sex being high. The army provided prophylactic centres where troops could go to receive medical attention.


An order had appeared affecting all those who chose to use brothels or obliging locals. As I recall it, it demanded that after intercourse, a visit to a prophylactic station was obligatory and a certificate would be issued. Any man contracting VD who could not show a certificate would, possibly, face a similar charge as for a self-inflicted wound.

There were no personal accounts from The Eagle & Gun Regimental Association contributors which mention sexual encounters. But this is probably not surprising, given the affect such confessions may have had on their families.


I suspect that most of we soldiers remained relatively chaste, with an occasional lapse.
Me? Once, in a barman-friendly hotel {the barman gave Len the room number of a call girl}. A brief encounter. All went normally until the air-raid siren sounded. A classic case of coitus interruptus.


The end of Operation Torch


In May 1943, after a tough campaign, the Allies had gained complete control of North Africa, marking the end of Operation Torch.


Approximately 250,000 German troops finally surrendered to the advancing Allied army. The Allies paid a heavy price, with nearly 72,000 men either dead, wounded or missing. These were mostly Brits, but included over 18,000 Americans and over 16,000 French.


The King Drops By


Whilst on site, which overlooked a main road, King George VI and Winston Churchill made a visit; who remembers having to attend the reception party?

From the RA Drama Report;

On 17 Jun King George VI visited the area. All defences were at full manning during the visit.
Enemy aircraft were often seen but the level was that of single aircraft or pairs flying over Bone at dawn and dusk.

All guns in the area "stood to" {on duty} on occasion of the visit of H.M. the King to the area.


ToDo; was Churchill with the King?