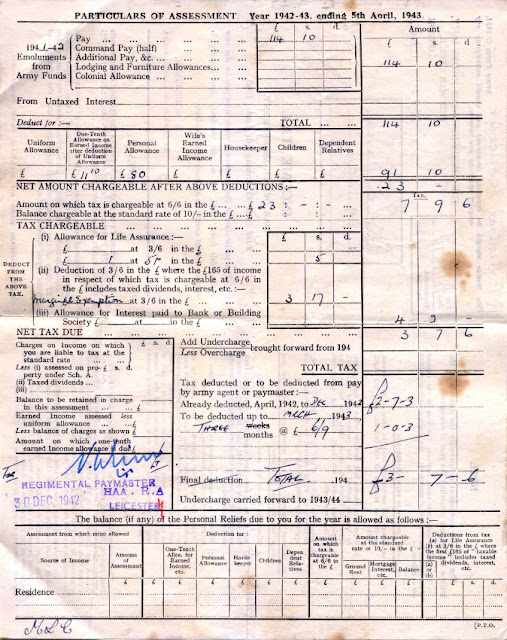 
It is very difficult to find a meaningful comparison between earnings now and those of the 1940s, but taking the Labour Earnings figure from MeasuringWorth.com I'd say £150 pa in 1942 is similar to £20k pa in 2017 (or about £400 per week).


I don't really understand the idea behind these payments, but the sums of money involved could have proved useful to ex-servicemen while they readjusted to civilian life and looked for employment. The payments were made via Post Office Savings accounts. 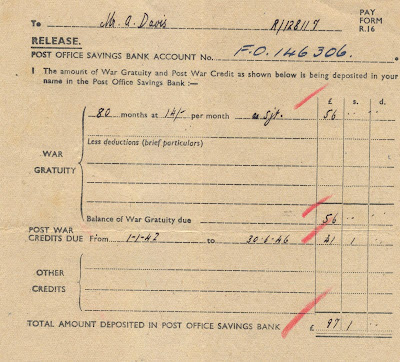 So here we see that dad received £97; let's call it £12k in today's money. This could have gone towards the bungalow that mum & dad bought around 1950 for £500. However, it is more likely that a large chunk of this was used as 'living expenses' while mum and dad looked for work. I don't know, I can only speculate.


When servicemen were demobilised and allowed to return home, they were encouraged to exchange their uniform for civilian clothes.

We have a copy of the British Forces weekly paper "Crusader" dated Sunday, May 27th 1945. The centre spread is an article called "Soldier into Civvy - it takes eight minutes". The military clothing depot issued the civilian clothes, and the entitlement was:-

In addition, the serviceman could retain certain articles from their Army kit {although what exactly was not specified}

I understand there was the option of either a 3 piece suit or jacket & trousers, although that is not mentioned in the Crusader article..

One of the larger suppliers of uniforms during WW2 had been the tailor "Burton" known at the time as "Montague Burton" (but not the owners real name). Burton also supplied many of the demob suits.

So if a serviceman took the suit complete with hat, raincoat, shoes, socks, tie, shirt and collars, he was said to have The Full Monty.


Many men felt uncomfortable wearing their demob suits, as they believed they had just swapped one uniform for another.

Alas, I have no idea what option my dad took, or how long the clothes lasted.