It is now October 2017, my dad died 20 years ago last May, and I’ve only just started to piece together his part in World War 2.

When we were still children, dad never spoke about his war years, other than to warn us that Bert Scott’s stories were just fairy tales. 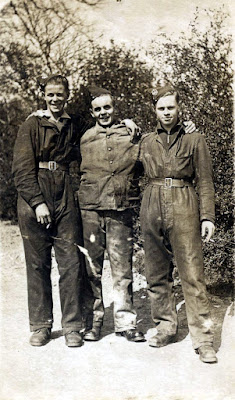 Bert was our next-door neighbour, having moved his family out of Walthamstow during the early 1960s to the other half of our semi-detached bungalow in Benfleet Essex.


Clearly dad (centre of this picture from 1940) and Bert (on the right) knew one another really well, but they were two very different people. Dad certainly had no intention of trivialising or glorifying war in front of us kids.

Don’t get me wrong, we kids loved Bert’s stories, like the time he was thrown in the glasshouse (a military prison) for being a naughty boy, only to be let out a few hours later because he was the only one that could fix some bit of broken equipment!

My mother used to tell us that when dad was posted over-seas in 1942, he wrote her a letter in which he asked her not to forget to give the dog a bone.


They didn’t have a dog. So she looked on a map and worked out exactly where dad had been posted. I’m amazed that those responsible for vetting the troops letters home, had allowed this one to slip through the net!