When I stood up to address the congregation at my mothers funeral, I mentioned some of the many things that had changed during her 94 year life, the war years and her marriage to dad. I also mentioned the humble toothbrush.

a revolution in oral hygiene


Before World War 2, most people did not brush their teeth. Toothbrushes were available, but relatively expensive for ordinary working class folk. The brush was generally made using boar's hair, or sometimes from other animals such as the horse.

But then, in the late 1930s, two things were to change peoples personal hygiene habits.


A new thermoplastic material called Nylon was developed, and the first, cheap nylon toothbrush was introduced.

The British military obviously wanted to keep its troops fit and healthy. So all personnel were required to wash, polish their boots, and brush their teeth every day. This would have applied both to my mum in the ATS in Britain, and my dad overseas. 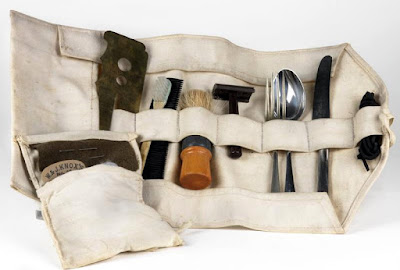 Second World War period British Army issue holdall (washroll) containing a
soldier's personal requirements for hygiene in the field as well a personal
clothing repair kit ('housewife'). The holdall would be carried rolled and stowed
in the man's haversack until required. Regular shaving (when practical ) was, and remains,
mandatory, promoting cleanliness, morale, and discipline in most theatres of operations.
(image & text courtesy of the Imperial War Museum)


When the war was over and people returned from their wartime roles, they continued the habit of brushing their teeth every day, and this spread to their families. Cheap nylon toothbrushes were now widely available. Within a few years, most people in Europe and North America were brushing their teeth daily.

This hygienic revolution may have come a little late for my parents generation. My dad says he had trouble with his teeth during the war and told the Army dentist to "...take the bloody lot out".

But the first generation to benefit, were the post-war baby-boomers like me. These days, we have probably got used to seeing people on TV with near perfect teeth. But just look at an old TV program from the 1960s and you will notice the difference.