While recently searching the garage for a pair of matching hooks, I opened several tins and old coffee jars before stumbling upon a couple of World War 2 badges.


This was a lucky find as I thought I'd already safely retrieved and stored all my dad's old war stuff inside the house.


But this was one of several old rusting tins that I'd scooped up from dad's shed shortly before selling our old family home.

In my dad's World War 2 notes he mentions the Essex Cap Badge ("The War Years - dad signs up").

Initially I was puzzled by the word "EGYPT" as I was pretty sure dad never went there. However, the design of this badge has evolved due to regiments being merged together, and maybe elements of individual regiment badges have been incorporated.

I don't know if this was the only one that he possessed or whether he was issued with several during his time in the regiment. But this is an original metal badge. During 1941 they started making these from plastic because there was a serious metal shortage.

I remember that there used to be several tins containing military badges and buttons, which are now lost. The other badge I found was of an artillery gun. I remember seeing quite a few of these in the past, some with words above or below the gun. 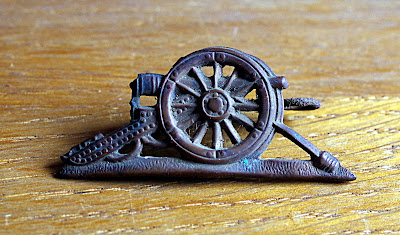 This one is a relatively simple design, with a split pin at the back, and I'm not sure how this would have been worn (more research required...)