In this case, its not a gift box that a soldier received containing special rations for Christmas.


My dad packed a few items into a small wooded box and labelled it: "soldiers gift box".

As a child, I remember this as a box in my dad's shed. It simply contained a couple of very old electrical fittings, a few assorted wood screws, and a broken pencil. It was just one of many containers which held items that my dad thought "...may be useful" at some point in the future.

19 years after dad died, mum died, and I was left with the task of clearing the house and out-buildings of "stuff". I had to be ruthless, and I don't even want to think about some of the stuff that I condemned to land-fill. 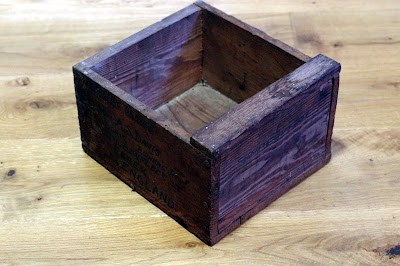 But this crudely made wooden box survived. And when I started my investigation into mum & dad's life during World War 2, this box became an object of interest. It looks like it was nailed together in order to send stuff back to mum from overseas. 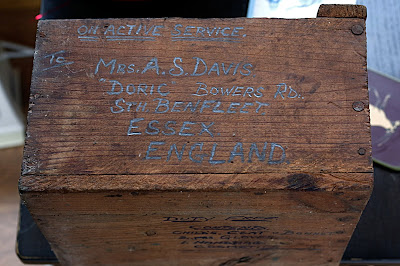 Since it is addressed to mum as "Mrs" it must have been sent after they married in 1942. 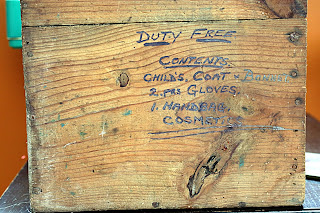 And since it bears the inscriptions "On Active Service" and "Duty Free" it must have been sent while dad was overseas between 1943 and 1946. The contents included "cosmetics" so this probably rules out North Africa, and the most likely period is post-war, when dad had a policing role in northern Italy and what is now Croatia. So I think I can narrow this down to the latter half of 1945 or the very early months of 1946.

From the "contents" list it appears that dad also sent a "child's coat & bonnet". These items must have been for a baby, as the box only measures approximately 9" x 8" x 6".

The final question is why send a babies coat & bonnet to my mother?

Mum didn't have a baby in 1946, and I can't think of other members of the Essex side of the family that would have had babies at this time. And if it was for one of dad's Dorset relatives, the coat would have been sent to a Dorset address.

It could be that they were planning to start a family as soon as dad got back to England. Dad was probably back by late summer 1946, and my elder brother Phil was born June 1947. So conception was about September 1946, which fits nicely with dad's release date!

Whatever its real history, this old box has now been promoted, moving from our garage to a cosy warm location beside our wood-burning stove, where it holds a gas lighter, a pack of paraffin fire lighters, and a pair of Chesney's stove gloves. 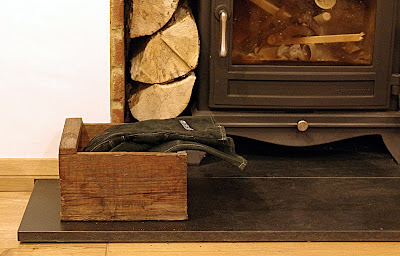 Eventually it may help power the fire itself, especially if the wood-worm continue their destructive habitation. 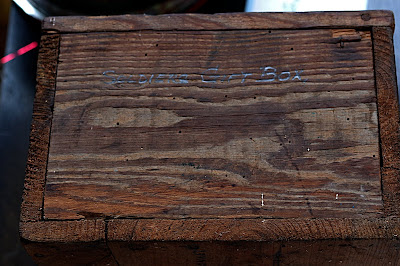