Yet another book about Churchill, and one which I have enjoyed from the first page to the last.


This book by Andrew Roberts attempts to cover the whole period of his life.

The title hints at Churchill's belief from a young age that he would eventually serve as Prime Minister. 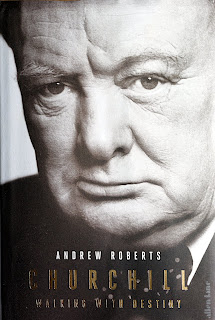 The author puts a fairly balanced view of Churchill, his bad points as well as his good, but also highlights the many remarkable political observations and predictions which ultimately proved that Winston had a good grasp of world affairs.

A few points that this book highlighted for me;

It is also clear that the British wartime view, often expressed, that "...we are all in it together" was far from the truth. Firstly there were the elite who did not suffer the hardships of rationing. Many continued to consume the finest food, alcohol and cigars (...including Churchill).

Then there were the spivs dealing in stolen goods and the businessmen making large profits from supplying the war machine. And lets not forget those lucky enough to avoid military service and who used the situation to strike for better wages!

The other common view, still referenced today, is that Britain has a 'special relationship' with the USA.  In the 1940s, Churchill agreed to share nuclear knowledge with Roosevelt, and send our experts over to America to help with development. However, when Truman was made president he locked the UK out. So we eventually had to do it on our own, a few years later.

I don't believe that this 'special relationship' existed in the 1940s anymore than it does now. We are two nations divided by the same language.

It seems that Churchill got the job of PM either because Lord Halifax did not want the responsibility, or was too modest to put himself forward. Even those that were frequently critical of Churchill during the 1940s agreed that Winston was head and shoulders above everyone else.


This book has been a joy to read. I think that previous books on Churchill that I have read have helped prepare me to read this book, as I was already familiar with some of the characters and events covered, but not in such depth.

I thoroughly recommend this book!