How do Boris & Winston compare?

I cant help but compare Boris Johnson with the late Winston Churchill.


The unexpected rise in Johnson's fortunes over the last 18 months have made this comparison irresistible.

At a decisive meeting on the 9th May 1940 between Prime Minister Neville Chamberlain, Chief Whip Viscount Margesson, Lord Halifax and Winston Churchill, the PM offered his job to Halifax. All Halifax had to say was "yes" but he chose to mention difficulties of accepting the role because he was a Lord. So Churchill, who 18 months earlier had been in the political wilderness, stepped forward and took the top job.

Churchill and Johnson worked in journalism while pursuing their political careers. However, they were both ridiculed in the press, and not considered suitable or likely to ever get the top job of British PM.

Both men are credited with a fertile sense of humour, albeit one which was considered by some to be inappropriate on occasion.

Both are recognised as charismatic, skillful, entertaining orators, and both have reputations as larger-than-life, physically fearless individuals.

Johnson, like Churchill, had a childhood ambition (almost a vision) of become Prime Minister, although Boris initially wanted to be 'King of the World'.

Naturally, Churchill's story has played out, and we know how he turned around Britain's fortunes during World War 2. He was seen as a national hero, but the post war electorate didn't want another Tory government, so he had to wait for a second general election before being returned to power. 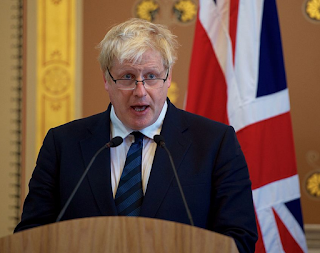 We have no idea how things will play out for Johnson (or Britain) during his tenure as PM. We don't even know at this stage how long he will keep the job. The 24th July 2019 could enter the history books as a significant date, or it may turn out to be just another day.