A Woman Of No Importance by Sonia Purnell

Virginia Hall was one of the most amazing people of the 20th century.


The fact that she was an American woman with a wooden leg made her exploits all the more astonishing.


She also had to overcome the problem of often being surrounded by weak, feeble men that didn't provide the level of commitment necessary for her difficult task as a secret agent. 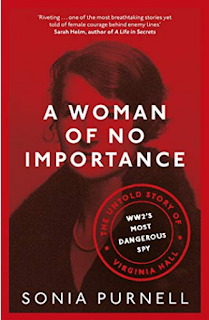 To further compound her problems, it was also assumed by her male superior officers that she was 'just a woman' and therefore could not be awarded the authority necessary to take decisions, train recruits and keep her male colleagues under control.

Despite these issues, she worked for both the British SOE (Special Operations Executive) and the American OSS (Office of Strategic Studies) supplying London with intelligence reports and sabotaging the Nazi war machine during their occupation of France during the 2nd World War.

Even when she worked for the CIA in the 1950s and 1960s, she still suffered discrimination by the largely male dominated secret service organisation.

She was a tough, determined lady who set up a network of local resistance groups during WW2 and eventually made the grueling trek over the Pyrenees to escape capture.

I found this book very interesting and I highly recommend it.