While not providing as much detail as a Regimental War Diary, this report may give a good overview of locations and engagements.


The amount of detail varies with regiment, but I was advised that the report for the 59th (the Essex Regt) HAA RA contained quite a bit of information, so I paid £25 and placed my order.

The detail within the report comes from a basic database and the document is a PDF (in my case 9 pages). I say 'basic' database because all the data is held in database fields, including the detail for each of the war years. The date field is in the form: 01/01/19xx and the detail field contains the text, essentially as one long line.

This makes it a bit difficult to read and to refer to, so after reading it for the first time I did a block copy of all the text in this PDF file and pasted it into my word processor (LibreOffice Writer).

I was then able to quickly break the document down into paragraphs, label months and include some text formatting. 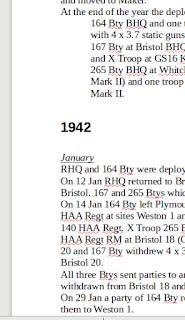 The report for the 59th HAA contains a lot of typos. The spellchecker highlights most of these but some are more subtle errors; since RHW does not appear to be a military abbreviation, and as I noticed "W" sits alongside "Q" on a qwerty keyboard, I reasoned that this should be RHQ. Also, "N^" is probably "N6".

The information in this report is also creating problems with my written history for my dad's time with this regiment. It now appears that dad's Battery (164) did not arrive in Africa with the other two. For some reason they were delayed by a few days and landed on the 5th January 1943. There is also a discrepancy in whether they had to move locations due to the eruption of mount Vesuvius.

I'm hoping that some of this will become clear when I see extracts from the full war diary, later this month.


To give an idea of the writing style, here are a couple of extracts from the report;


On 5 Jan 164 Bty arrived at Bone and proceeded to No 4 Transit Area at Tabacoop.
On 6 Jan the GL station of 265 Bty was in action at B11. Three Oerlikon guns were also manned at this site for the defence of the GL. Two 3 inch guns were moved to B12 by 252 Bty.
On 7 Jan word arrived that ship J43 carrying the equipment and transport of 164 Bty had been sunk at sea. With the vehicles was Lt BM Ring and 10 ORs of which only Gnr Beaumont was saved.

Many of the gun sites/locations are described by only a letter & number (e.g. B12) although it is normally clear which Battery troop was at that location.

On 15 Mar the harbour was attacked by 20-30 aircraft and all positions engaged. 1878 rounds expended.
On 18 mar Vesuvius erupted and by 21 Mar the lava flow was moving in the direction of N14 which was ordered to be ready to move. In the event this was not necessary as the lava flow stopped on 23 Mar.
On 24 Mar N14 was in action against enemy aircraft. 14 rounds fired.
On 31 Mar 164 Bty moved to the Pozzuoli area to relieve 305 HAA Bty of 100 HAA Regt which was leaving the area. A Troop occupied B9 and B Troop occupied B2. BHQ was established in a nearby house.


Unless you already have the full war diaries for the regiment of interest, I think this report is a great place to start. It provides an excellent overview for just £25, allowing the researcher to be selective when it comes to obtaining extracts from the full regimental war diaries.

Although you can obtain the full war diaries from the National Archives, or via other researchers (see WW2Talk) it can be quite expensive.