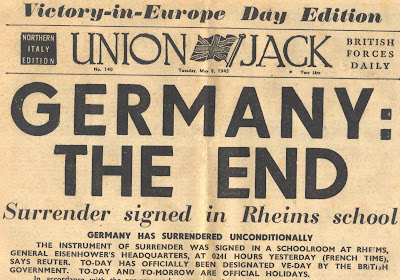 On 30th May the 59th Regiment was warned to be ready to convert to a garrison police unit, which was to wear regimental uniform with the exception that khaki "flat hats" and police arm bans would be worn. Each Battery was to form a Garrison Police Battery and the Regiment formed a transport company.

During the summer of 1945, various Army and Regiment formations began to be broken up, with troops either sent home or redeployed. 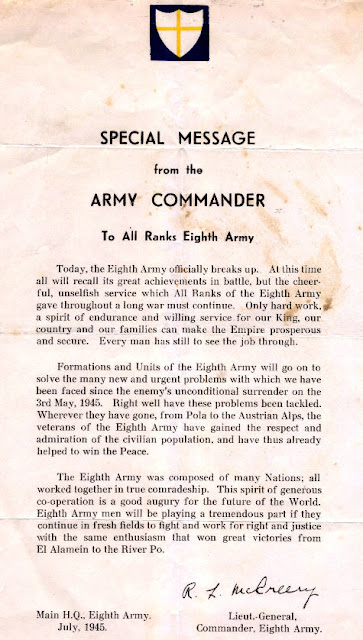 According to the Eagle & Gun diary;

The Yugoslav guerrillas had been disrupting the Nazis in the north-eastern region of Italy around Trieste, and by May 1945 the Yugoslav army had  moved in and taken control from the Germans.

June/July 1945: some troops (including dad) were transferred to the 78th Regiment 700th BTY RA Auxiliary Police and received Military Police training. Dad was in the Trieste and Pola regions by August 1945 as part of the Venezia Giulia Police Force.

According to Henry Moore, they often carried out street patrols and had to break up fights between Italians and Yugoslav Partisans. The Partisans had put up fierce resistance to the Axis powers of Germany and Italy, so local Italians were still seen as the enemy by them.

The area known as Julian March around Trieste and Pola (Pola is now Pula in Croatia) was disputed territory, with the British & Americans administering one half (Zone A), and the Yugoslavs the other (Zone B).


Relations in this region were tense, and remained so until 1954. In 1946, two US transport planes were shot down by Yugoslav forces.


Not quite the end

Although the war was now over, it would be another 12 months before dad was released from the army, an even then he would remain a reservist, possibly for another 5 years until 1951. 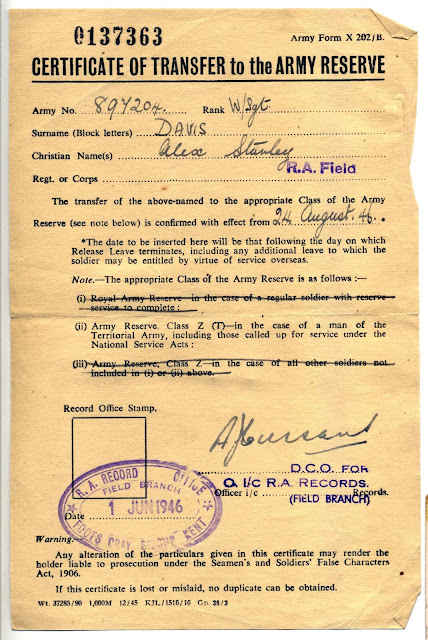 By the spring of 1946, dad was clearly getting restless. He must have written to somebody in government complaining about the time it was taking to be released from the army. I don't have dad's letter, but I do have the reply; 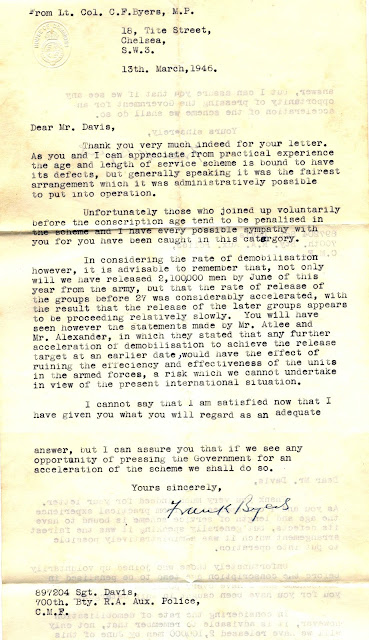 It sounds like others, with shorter service than dad, were being released earlier, and that by volunteering in 1938, dad was further back in the queue.

C.F.Byers (Frank Byers) was the Liberal MP for North Dorset at this time, but had also served in the Royal Artillery. I don't know whether dad wrote to him specifically, and if he did, whether Byers was his MP, as I would have thought dad was registered to vote in Essex by this time, not Dorset.

However, if dad did vote in Dorset in 1945, he must have voted Liberal because the Labour party did not field a candidate. 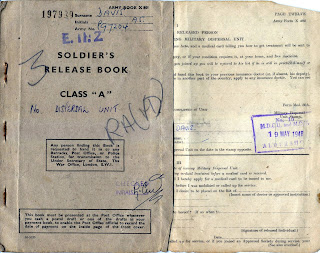 The end of the 59th Regiment