During 1941/42 the Regiment were posted to several locations around Britain.


Mar/Apr 1941
We moved out of Essex and travelled by train to Scotland. My battery (164) was stationed in the Dumbarton area. A site at Bowling remains in my mind as the most dominating site from anti-aircraft and coastal defence {perspective} we ever occupied. Unable to remember the height of this hill, but it was a long way up when walking back after a few pints in Glasgow or Dumbarton. The site overlooked the Clyde, Helensburgh (Sunderland flying boat area).
Rudolf Hess was the German who came down over the hills. Our search parties found nothing.

Rudolph Hess was a senior German politician who secretly flew from Germany to Scotland on 10th May 1941 on a mission which he insisted was for peace talks. When his plane ran out of fuel, he jumped, and landed near Strathaven, probably at least 15-20 miles south-east from dad’s location.

There are conspiracy theories surrounding Hess, what he was actually doing in Scotland, and his eventual death by suicide. His body was dug up twice and moved, before eventually being cremated, to stop his final resting place being used by Neo-Nazi demonstrators.

Dad continues;
Jul/Aug 1941
Our departure from Scotland taking us back south would have been July/August. Our troop train from Glasgow over night abides in my memory, as at 6am the following morning I took over duty as {Orderly?} O/Sergeant {dad was still only 19}.

At 6:30am I went through the train to rouse the bodies that were sleeping of sorts, dishevelled and in various states of dress. At 8am I went back again to warn the lads that we were 1 hour from Bristol Temple Meads. However those lads washed, shaved, and re{kitted???} themselves, was a credit only the 59th could handle.

On de-training at the station we all assembled on the station forecourt; what an area that was, a natural parade ground to take the whole regiment. My duty was to do that and to bring the Regiment on parade has remained with me ever since. The luck of a duty opportunity!!! {i.e. dad was very proud that day}

Our march through the city of Bristol to Filton (R.H.Q.) where dear old Brewster our R.Q.M.S. was there to receive us and issue kit (what a character he was). We then moved in to Horfield Barracks. During our stay there we had several training courses. Do you remember the R.S.M. and barrack square? His eyes were everywhere; a voice would bellow out from the side as he was catching the troops cutting across the barrack square; a few doubles around the perimeter soon taught the lesson.

Also the main entrance under the arch had two long mirrors, one either side, and a notice to say “Stop, adjust your dress before leaving”. Heaven help you if he spotted you walking straight through...Happy Days!!

Sept/Oct 1941
We moved into Kent with gun sites at Gillingham & surrounding area. This being the Medway, the site at Gillingham was practically opposite Hadleigh from where we started. We stayed here until February 1942 when we pulled out for intensive mobile training at Blandford, Dorset.

According to a spoken account by Henry Moore of 164 Battery (Imperial War Museum website), they were sent to Weston-super-Mare with 3.7 inch guns due to intelligence reports which anticipated air-raids.

Henry was part of the 5 man team operating the “Predictor”. He was number 4. He was the one to tell the Officer when they were ready to fire (i.e. based upon entered Bearing, Height, Angle, & wind velocity). The Officer then just shouted “FIRE”

The Battery were positioned on the edge of a cricket pitch, and they were given ridiculous instructions not to walk on the pitch, or to lay down sandbags (which were normally used around the guns to reduce the blast).

During a very heavy raid, bombs were dropping all around them (including the precious cricket pitch). The raid was so intense that the troops were given the order to disperse, which meant “run away from the guns fast, in any direction you like”. This was the only time during the war that 164 Battery received the order to ‘disperse’.

After the raid was over, the troops regrouped for a roll call. Three men were missing. They never found their bodies, only pieces of flesh scattered around over a large area.

According to information on the 'Bristol Past' website, this incident probably occurred during one of the two air raids on Weston-super-mare that took place on the nights of 27/28 or 28/29th June 1942.

By August 1942 the Regiment was under direct War Office control as part of the Field Force, and now included all necessary units to make it fully mobile;


I thought my mum and dad met during 1940/1 when dad was posted to the Benfleet area of Essex, and mum (who already lived there) joined the A.T.S. (Auxiliary Territorial Services). However, the newspaper article below seems to suggest that they met while both posted to Bristol, possibly in 1941/42. 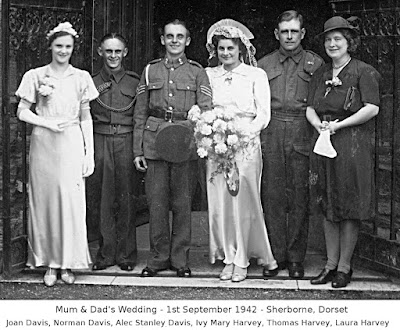 An A.A. marriage took place at Sherborne Abbey on Tuesday. The bridegroom was Sergt. Alec Stanley Davis, son of Mr. And Mrs. A. Davis of 11 The Grove, Westbury, Sherborne, and his bride was Pte. Ivy Mary Harvey A.T.S., employed at a western A.A. Divisional Headquarters, and eldest daughter of Mrs. K. Harvey, Doric, Bowers Road, South Benfleet, Essex. Shortly after Pte. Harvey was called up she was posted to the west country where her fiancé was in an H.A.A. Battery. Sergt. Davis, a native of Sherborne, was employed as a glove cutter before the war.
The Rev. Beddow officiated. The bride, who was given away by Gunner Thomas Harvey, R.A., wore a shell pink satin dress with string of pearls and wreath and veil to match. She carried a bouquet of white carnations. Miss Joan Kathleen Davis (sister of the groom) was the bridesmaid wearing a dress of turquoise blue with gold cross and chain (gift of the bridegroom) and carried an ivory-bound Prayer-book. The “best man” was Drummer Norman E. Davis, Gloucester Regiment.
A reception at the Oddfellows’ Hall, Westbury, was attended by 60 guests.
The honeymoon was spent at the bride’s home in Essex, the bride travelling in a strawberry coloured dress with black coat and halo hat to match. The bridegroom gave the bride a dress ring, and the bride’s present to the bridegroom was a dressing set.


The day they married was 18 days before dad’s 21st birthday (but the Marriage Certificate gives his age as 21). Within 3 months he was posted overseas.