The War Years - dad signs up

In April 1939, with widespread fear that we may soon be at war once again with Germany, National Conscription was introduced in a limited form, only for men between 20-22 years old. According to Wikipedia, these guys were known as Militiamen.

Although mum had said that dad was under age when he signed up, I didn't originally include this statement in dad's history for two reasons;


But when I listened to the spoken history by Bill Church, I realised this was possible. Bill was born in 1920 and joined the Territorial Army at the age of 16 in 1936, simply by claiming to be older than he was. Recruiting Officers were happy to take anyone that was big enough; it was a numbers game.


My regiment, The Queens own Dorsetshire Yeomanry Regiment, which I joined in the T.A. {Territorial Army} in 1938 at the age of 17 years old. This was a field artillery regiment, 18 pounders which had been horse drawn and then part mechanised (with gun towers only) the gun and limber being original. They were later updated to 25 pounders.

Note: The "limber" was originally a wheeled and detachable part of a gun carriage that enabled it to be horse drawn.

Towards the end of the summer of 1939, things were getting rather more serious; 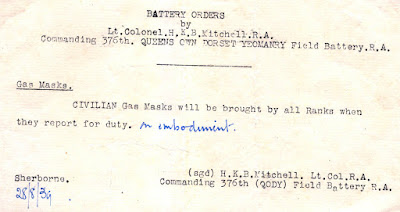 Although dad was already in the Queens Own Dorset Yeomanry, he still received an "Embodiment" order (Notice to Join) a few days before war was officially declared... 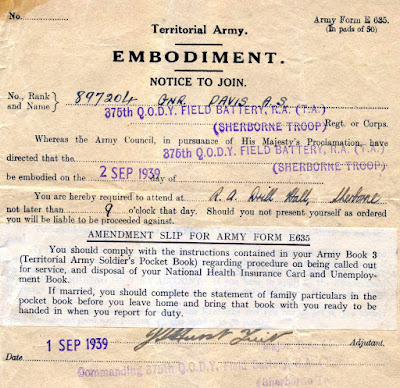 ...which I think was an indication that he now belonged to the Army (i.e. it didn't matter whether or not he was already serving part-time in the Territorial Army, he was now a full-time member of the Army). Dad was originally in the 376th (Sherborne Troop) but the Notice to Join mentions the 375th (Shaftesbury).

However, according to dad's service records, he joined 375 Battery of the 94th Queens Own Dorset Yeomanry Regiments (Field RA) on 26th April 1939.


On mobilisation (Sept 1939) we moved out of Sherborne to Shaftesbury {also in Dorset}.

Towards the end of October 1939 the regiment had to prepare for embarkation for overseas duty, hence the transfer of the ‘immature’ troops {dad was now 18 but “immatures” were under 20 years old until 1942, when the age was lowered to 18}. With others I travelled out of Dorset into Essex, arriving at Leigh-on-Sea railway station. Army lorries took us to a drill hall at Eastwood.

I joined the 82nd Regiment. Initial training took place at the Crown public house dance hall in Crown Hill, Rayleigh. After that I joined a gun site at the Carpenters Arms in Rawreth, Rayleigh. This site was water logged and knee deep in stinking mud and was condemned. The guns had to be winched off the site.

For Christmas 1939 I was on the beach at Langard Point Felixstowe {Landguard Point is now a nature reserve and there are still WW2 concrete bunkers there}. Two men to a bathing hut! Heavy snow fall, we use to fill the iron wash bowl and stand it on a Valor oil stove. On looking back now, it was the only thing that saved us from being asphyxiated! Christmas came and went with no special treats, unlike the boys at Hadleigh who were taking their marvellous Xmas fayre for months after.

Early January 1940 the 82nd began mobilisation for overseas duty. So I was on my way once again, this time to join the 59th Regiment at Hadleigh. The boys from Dorset with their chocolate coated buttons {not literally}, cap badge, etc, and olive green cap band were the envy of the lads who were laden with button stick metal polish, etc (all we had to do was clean our boots).

However, that did not last many weeks and we were issued with new kit, battle dress and the Essex cap badge, so our ‘spit and polish’ began. We were allowed to retain our service dress, so when the London lads went on 24 hour leave they were busy purchasing our sets of gun buttons, RA epaulette and collar grenades, all of brass of course.

Memories of the lads who were handy with needle and thread; alterations to our trousers, jackets and even the peaks on our service caps; our uniforms became tailor made to measure.